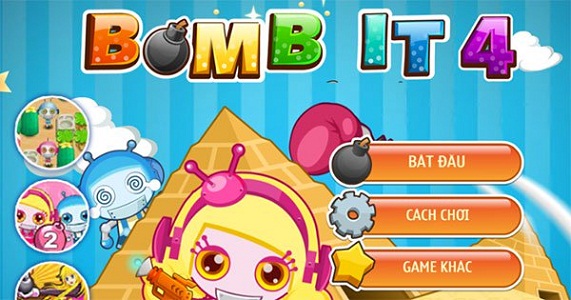 Bomb IT 4 is a bomb game that offers colorful maps and new game modes.
Coming to Bomb IT 4, you will continue to enjoy a new game of the classic office game genre that has been played by a lot of players. With the unique and very funny images, the content still revolves around the funny alien characters. Enter the world of this fun game, you can choose your own character, as well as create costumes, hairstyles, eyes and nose according to your liking, then choose 1 of 4 game modes, and the number of matches The player I want to start entering the exciting battle. You can play in the familiar bombing mode to take out other opponents, you can also fight by shooting, getting enough gold, or gaining the most territory to be able to win. . Such play will make you feel very attractive and attractive. And please show your skill and agility in each game screen to get the highest score.
Similar to the other Bomb IT games, your mission in this boom it 4 game is to destroy all enemies in each game screen with powerful boom it 4 balls before the countdown points to you. 0, you will receive a reward after each victory. The game has a simple operation, not picky players from children to adults can easily entertain with just an internet-connected computer or phone.
This game is a very unique version compared to other versions from the original IT Bom game. You will have more fun and relaxed entertainment after stressful working hours

How to play game Bomb It 4