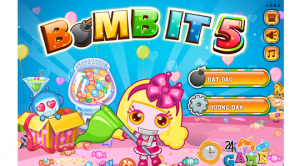 Bomb It 5 is a classic genre game for children promising to bring familiar feelings but combined with many new and unique elements.
In the beginning, you will have to fight 3 other opponents in a completely empty screen. Occasionally there will appear items that support your fighting power such as increasing the number of bombs, increasing the length of the bomb, helping you run fast, frogs to ride, cars to run, … Try to win the useful tools, but your most important goal is to defeat the surrounding opponents. The next level is the familiar jungle style but the maps will be greatly renewed. You will still have to destroy the blockhouse in the game screen, paving the way to find and place bombs, taking down the remaining opponents. That depends a lot on your ability to move quickly and skillfully. Remember that the more IT bombs you have, the better chance you have of winning.
In the game Bomb IT 5, you can play with mode 1 or 2 people, together against opponents very sly and agile. In this It 5 bomb game, you can place an Avatar image for the character, change costumes by exchanging points, buying additional items to increase the power of the game.
This online mini game will bring a lot of excitement and pleasure as well as help you cut stress after long hours of study and stressful work. This game has attracted a lot of plays from around the world, enough to see the fascinating appeal of the game. You can also play the Boom Online version before coming to this new version

How to play game Bomb It 5