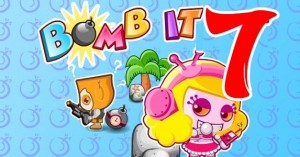 Bomb IT 7 is the latest version of the Bomb It series that is loved by many people around the world with an interesting bomb style that promises to bring more fun and unique fun for people. Play, especially kids will love with the style of this game.
In the game Bomb IT 7, still the characters the alien boy will participate in the unique maps to be able to place bombs and fight to find out who is the best survivor in the version. thing. You will be able to choose a character, choose the map and game mode that you like best, then step into the fun battles. In it, you will have to use bombs to break the obstacles. From there will appear the path so you can contact your opponent, and defeat the opponent. In addition, you can also get very unique items, great support for you like fast-running drugs, shooting weapons, bombs to order more, powerful drugs for bombs … Let’s use them effectively.
The game mode will also make you feel more excited when in addition to the traditional bombing mode, you can also participate in new ways of playing such as collecting coins, marking territories, or destroying. opponent by the specified number of times.
Game Bom IT 7 promises to bring you moments of relax extremely fun and equally dramatic with the peak Bom matches. Bom IT 7 version with a great upgrade in graphics and features with a lot of new weapons in the game, you can prove your super-bombing ability right on your mobile phone in a very easily. Try your best and win lots of feats with your ingenuity.

How to play game Bomb It 7