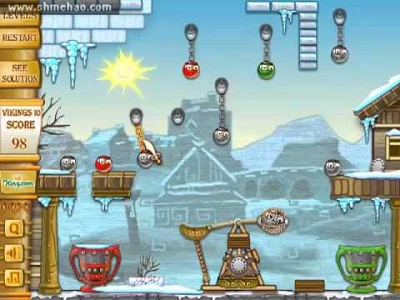 Civiballs 2 is a challenging physics puzzle for kids of all ages! The object of the puzzle is to cut the chains and get the colored balls into vases of the same color. Trial and error will lead to solutions! In Civiballs 2, you face complex and fun challenges in the lands of Romans, Vikings, and Inca. A great physics puzzle game with entangling 30 levels. In this interesting game, you have to put the balls into jars of the same color. But it’s not that simple. You will have to think about different combinations in order to succeed.
The game is a point & click physics puzzle. The object of the game is getting all the colored balls to fall into vases of the corresponding color. If a ball falls into a vase of the wrong color or a grey ball falls into any vase, the player fails the level. You can release balls by cutting the chain holding them. The order and timing of which they are released affect the puzzle. There are also other objects like launchers and seesaws which you can release by cutting chains. Balloons, catapults, fountains, and statues are new objects that were not included in the first game.
The game has 31 levels divided up in three sets, each with a theme from an ancient civilization: the Romans, the Vikings, and the Incas. There are 10 levels in each set and one final level. Each of the three tracks has its graphical theme and its own difficulty ramp.

Use your mouse to play this game.
Use your sword to cut the chains and release the balls. Get the balls to the urn of the same color to complete the level. Your score decreases for every second that passes, and if a grey ball gets into one of the urns, you have failed the level!