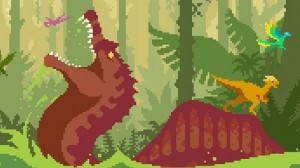 Dino Run is an endless running game style scene scrolling style Endless Run. With classic pixel-style graphics and the main character being a mischievous dinosaur, players will participate in the relentless race with many other strong opponents in Multiplayer mode.
Dino Run simulates a fierce competition race between dinosaurs and rivals. Your task is to control the dinosaurs that run horizontally across the screen, across multiple contexts, overcome obstacles, those in the way with the goal of escaping from the bad guys in danger of extinction. Meteors strike the ground as the player runs from left to right through populated landscapes due to the panic dinosaurs of many species. Along the way, players can choose to collect eggs and swallow bones for extra points and, to achieve milestones, to accelerate the individual evolution of dinosaurs by accumulating “DNA”. Use the weapons to stop them when they come near you.
There are four levels of difficulty: easy, medium, hard and crazy. During the challenging levels, players can collect “super eggs”, grant extra points and DNA. A total of 10 super eggs can be obtained.
The main feature of the game Dino Run
– Fun Endless Run action game with a diverse level system. Each table is a new context and challenge to avoid feeling bored.
– 3 main single-player modes: Challenge, Planet D and Speed Run.
– Multiplayer game mode in real-time, support chat while playing, random pairing and unique levels for opponents to join. Gamers will compete for rankings in the overall rankings.
– You can choose the number of hats, combine colors to customize the look of the character. Unlock new hats when reaching milestones on the run.
– Free Run mode: run unlimited and comfortably move forward, chatting with opponents while playing, battling NPC, immersive … arbitrary.

How to play the game Dino Run

Use the left mouse button to use weapons, space to jump