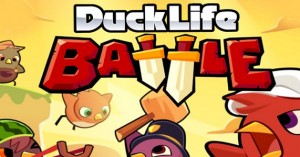 Duck Life Battle – Get your duck and come to battlin ‘! The latest Duck Life game is here and better than ever. Go to the gym to train your duck and get ready for battle. Fight against other ducks on your way to gain items that you will need to progress on your journey to become the ultimate duck warrior.
Have you ever seen an angry duck? Seriously, they’re not cute and pretty when they’re crazy. And this is exactly what you are about to face in this thrilling and funny game. Prepare yourself. It is fighting time!
Become the strongest duck warrior in Duck Life Battle. Control a small duck as he trains and fights with other ducks. Train duck’s strength, health, defense, speed and special ability to attack. Explore the world to collect coins, perform quests and participate in tournaments.
Once you’ve practiced enough with the various mini games, join the arena and face your first opponents in cruel turn-based battles.
Go through 6 different arenas to date and fight with over 40 exclusive battles with hundreds of weapons and outfits. Be captivated by your characters, complete thrilling quests and receive incredible rewards!

How to play Duck Life Battle

Create, train and equip your duck fighter and watch it waddle to the top
Train your duck’s strength, health, defense, speed and special ability in 25 brand new mini games. Explore the world of fighting with other ducks, join tournaments and complete missions to become the greatest duck fighter of all time.
After being transported by a tornado into an unknown world, your duck will have to learn how to fight to find its place in this new universe. But don’t panic, a dojo is available to allow you to train and progress in each of your 5 skills: defense, health, strength, speciality and speed.