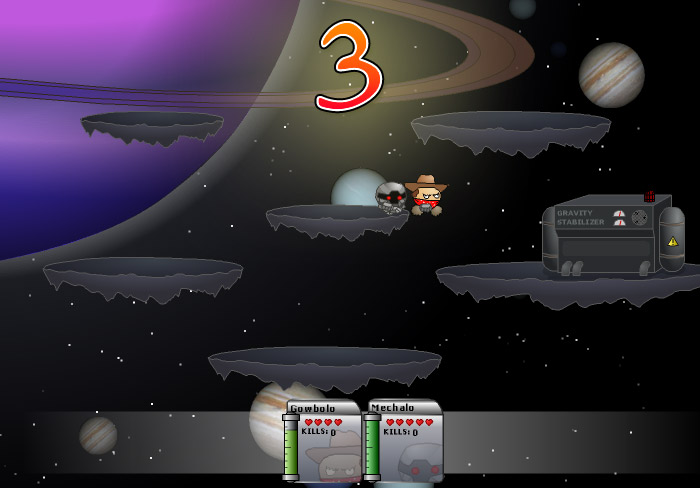 Gun Mayhem 3 funny multiplayer flash game, which makes it possible to have a great time with friends. It offers action in the world where Mafia laws are in charge of everyday life and the power is in the hands of gangs. You will be reincarnated as one of the gangsters to destroy everything to the ground. You are a true fighter for justice, whose task is to prove that laws of the Mafia cannot be violated, it is just impossible. On your way, you will be waited by opposing Mafia family gangsters and this fight promises to continue until the last enemy falls, fight till death. The whistle of bullets, guns, chaos, and mayhem is prepared for you in the third part of the game, continuation of a dynamic shooter. Just like in the first and second parts, first of all you create your character, and then help him to defeat opponents, throw them into the abyss, using various types of firearms and explosives. More arenas for shooting, new missions, and of course, the possibility to spend time with your friend. You will enjoy the sea of weapons, various improvements, and upgrades for your fighter. During fights, you need to stay constantly in motion; else your enemy will throw you into the abyss. Shoot accurately and quickly, dodge the enemy fire and defeat all opponents both in single battles and multiplayer games with real people. The task of Gun Mayhem 3 is very simple, you need to throw your opponent down, and the sooner you do, the better. If you like to shoot, then start playing. Before you engage in battle, you first need to choose the appearance, weapons, and characteristics of your character. Your enemy has two lives, so you will have to throw him off twice. During the match, your hero will get different bonuses that will add some scores to force and attack. The game has many different levels, each of which is unique and has its own characteristics. Hurry to fight; your opponent wants to be thrown away! The campaign mode is also available.

How To Play Gun Mayhem 3