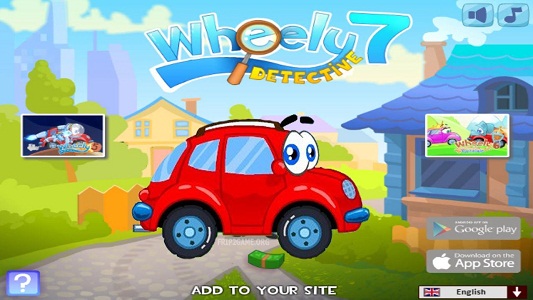 Wheely continues his adventure in the 7th version, and this time as the role of a detective character, looking for clues to solve complicated puzzles.
Everyone’s favorite red car adventure continues in the seventh game of the popular series! A lot has happened to him in his previous adventures, but nothing can stop Wheely from wanting to experience more! Normally, a trip to the bank won’t work, but you’re in the Wheely world, where even the simplest things turn into an adventure that will suck you in! After sending the money and returning home, Wheely heard the siren from the bank. Stealthy cars stole everything until the last penny and Wheely had to catch them. Take your magnifying glass and your detective shirt.
In the game Wheely 7 – Detective, your task is to help Wheely use all the necessary clues to successfully move to the finish line, collect all necessary items, gain 3 stars with each Level. During Wheely Saturday’s adventure, you will be visiting many different places in the city as you collect clues on each level. Like previous games in the series, each level is filled with puzzles and obstacles that you need to solve to complete the level. In addition to the main puzzles in the levels, you can also try to find two hidden items to earn stars at the end of each level. A toy car and a wheel are hidden in each level. Pay attention to your surroundings and you will find them. The controls are also easy. All you have to do is click on the buttons, levers, platforms and other mechanisms to move and activate them using the left mouse button. To complete a level, solve all puzzles, clear all obstacles and help Wheely reach the endpoint!

How to play game Wheely 7

Use the mouse to click on the car to move, click on support tools to overcome obstacles.