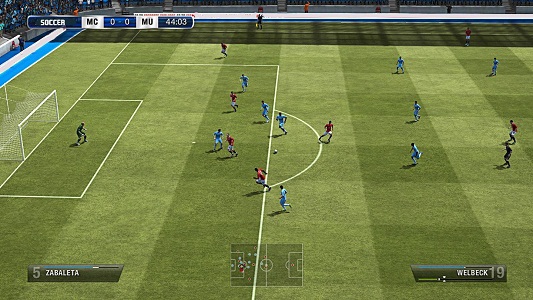 Entertainment with games always helps people relax after hours of stress. One of the most popular games is the Ultimate Football game.
In the game, you will be incarnated into the rulers of big teams in Europe to participate in the competition. You will have professional players with your favorite team, there are up to 1000 players in the game’s data, besides the graphical interface of the game is also very attractive when the 3D interface, the players will be controlled by you, handle the ball and find your way to the opponent’s goal and then score in the net.
Your task in the Ultimate Football game is to train, create a team of the most professional players, through each match the strength of the players’ experience is also increased and above all, you can enter the market. transfer school to look for players with good defensive offensive power to bring a good team.
You will enjoy an experience just like in the context of playing real football, choose a football team, be frustrated and create a team that never fails, towards the champion.
Simple operation, excellent visual effect, true player data. Try to beat all the opponents and win the championship, then in the transfer market, sign high-quality players with competitive income to strengthen the team strength more; implement the tactical system that you like in the competition, control the players to win the type of competition.
In the game you will have many choices about the squad, you can buy the players you like on the transfer market. In the last football game – Football player has up to 3 modes to kick that are modes such as career, world cup and friendly competition.

Feature of the game Ultimate Football

- The database has more than 1000 players
– Great 3D visuals and high-quality signal tones
– There are 3 modes such as career, world cup and friendly competition.

How to play game Ultimate Football

Use mouse to play game